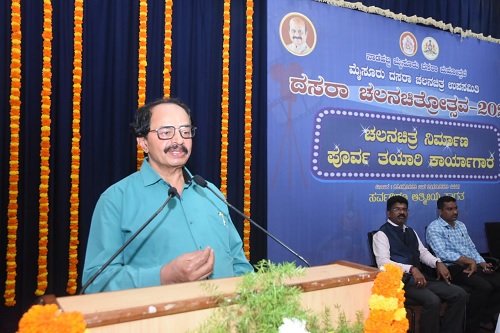 Mysuru, September 22, 2022 (www.justkannada.in): “Students should utilize any platform or opportunity that they get to learn,” observed renowned film director Nagathihalli Chandrashekar.
He inaugurated the Film Production preparatory program held at the Rani Bahaddur Auditorium in the University of Mysuru premises, organized by the Film Festival Sub Committee.
In his address, he said, “I am running a small film school in Bengaluru just for learning. I understand the advantages and disadvantages of it. Definitely it cannot be learnt in just 3 days. Several platforms will be prepared for the Mysuru Dasara Mahotsav. We should utilize such platforms.”

“Anyone who comes here should not return empty handed. They should learn something and take something, because learning and awareness is very important. Talent is a personal quality, inherent, nobody can teach it. Hence, skills should be acquired with interest and it can be honed by having a close rapport with the society,” he added.
Dasara Film Festival Special Officer R. Shesha, in his address said, “the participants should utilize the benefits of such workshops.” He also informed on the occasion that the Dasara Film Festival will be inaugurated by thespian Shivarajkumar.
Information and Public Relations Department Assistant Director and Film Sub Committee Secretary T.K. Harish, Director Mansore, Praveen Krupakar and others were present.
Keywords: Nagathihalli Chandrashekar/ Mysuru Dasara/ preparations/ Film Festival 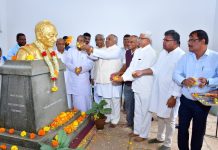 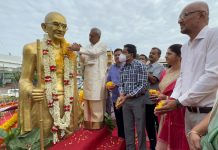 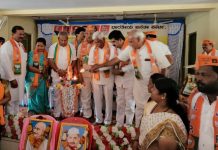