Mysuru, September 16, 2021 (www.justkannada.in): The protest against the demolition of the Huchchagani Mahadevamma temple in Mysuru by the members of several pro-Hindu organizations has intensified.

The demonstrators protested in front of the Kote Anjaneyaswami temple in the city, under the banner Hindu Jagaran Vedike. They shouted slogans ‘shame BJP’, embarrassing BJP MLA S.A. Ramdas and other local leaders.
The demonstrators expressed their ire against the BJP by shouting slogans, in front of the BJP MLA and workers. They also shouted slogans against District In-charge Minister S.T. Somashekar.
Keywords: Protest/ BJP/ temple demolition/ Mysuru/ intensifies 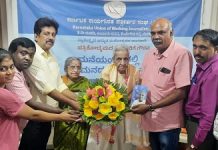