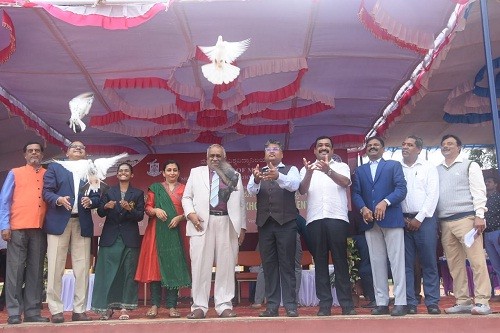 Mysuru, July 5, 2022 (www.justkannada.in): Prof. G. Hemanth Kumar, Vice-Chancellor, University of Mysore, today flagged off the All India Inter-University Women’s Kho-Kho tournament held at the Sports Pavilion in the University campus.
Both the courts were a little wet due to drizzling. The inaugural match of the tournament was conducted in the indoor stadium. The remaining tournaments will also be held there. In the first match the Mysuru team defeated the Kurukshetra University team of Panipat by 10-5 points and made a good start.

A total number of 16 teams including 4 teams from 4 zones across the country is taking part in the tournament. University of Mysuru from Karnataka, Kakateeya University from Andhra Pradesh, Calicut and Kerala Universities from Kerala are in the arena from the South zone. There will be a total number of 16 matches in the league level, The knock-out match will be held on July 6, followed by semi-finals and final matches on July 7.
Prof. R. Shivappa, Registrar, University of Mysore, Syndicate member Dr. E.C. Ningaraju, Finance Officer Sangeetha Gajanan, University of Mysore Physical Education Director Prof. Krishnaiah and others were present.
Keywords: Inter-University Kho-Kho tournament/ Mysuru

Furor in LC: Show Cause notice issued to LC Secretary